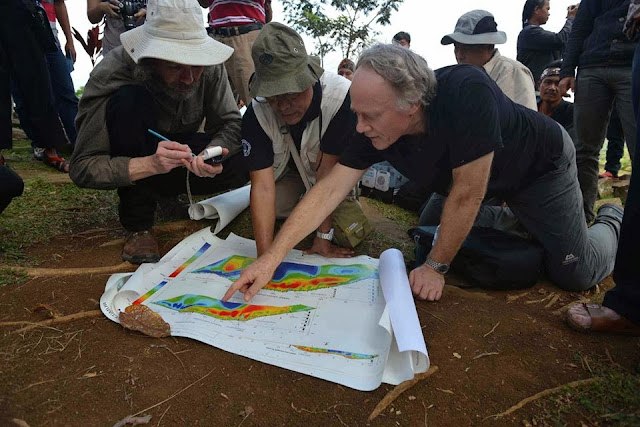 
On site at Gunung Padang, "the Mountain of Light", West Java, Indonesia. Photo shows Danny Hilman PhD (centre) senior geologist at Indonesia's Geotechnology Centre, Robert Schoch PhD (left of picture) geology professor at Boston University (renowned for his geological redating of the Great Sphinx of Giza) and myself, Graham Hancock, at the right of the picture. Dr Hilman is showing us some of the remote sensing results his team have obtained at Gunung Padang over the past two years of research. They have conducted extensive surveys with electrical resistivity, ground penetrating radar and seismic tomography and have analysed drill cores from selected areas across this mysterious and complex site. A brief synopsis is that there are large man-made structures of columnar basalt down to 15 metres beneath the surface with carbon found in the soils between the blocks giving dates that extend back as far as 26,000 years, but with intermediate dates of 17,000 years ago, 12,500 years ago and 11,600 years ago rising to as recently 2,500 years ago at the presently exposed surface. There is no doubt that the columnar basalt elements at all depths reflect human construction since they are laid in horizontal and in some cases sloping layers, whereas columnar basalt in its natural state is found only in the vertical formations. The implication is that we are looking at a megalithic site that has been in continuous use and has undergone continuous modification and development from before the last glacial maximum (21,300 years ago), through the meltdown of the Ice Age between 21,300 years ago and 11,600 years ago and on through to historical times. Indeed the site is STILL held sacred today: "Gunung Padang" in the Sundanese language indigenous to West Java means "Mountain of Light" or "Mountain of Enlightenment" and local people still revere its powerful spiritual qualities and resort to it as a place of reflection and meditation.


Needless to say, complex, large-scale megalithic constructions that are more than 20,000 years old (or 17,000 years old or 12,000 years old for that matter) cannot be explained by the current historical paradigm which tells us that the world in that period was populated only by "primitive" hunter gatherer societies incapable of such organisational and architectural feats. The overall appearance of Gunung Padang is roughly that of a step pyramid and interestingly Dr Hilman tells us that the remote sensing studies have revealed the existence of not just two, but in fact three intriguing voids concealed deep within this 100 metre (300 feet) tall "pyramid". Of these the largest lies at a depth of between 20 and 30 metres and is roughly 15 metres long and 10 metres high. Only excavation can reveal whether this is some freakishly regular natural tunnel or whether its rectilinear characteristics confirm, as Dr Hilman believes, that it is a man-made chamber. And if it -- and the other two voids -- do prove to be man-made, then what do they contain? The Halls of Records of a lost civilisation perhaps? Because this part of Indonesia stands at the southern edge of of what was once the vast Ice Age continent known to geologists as Sundaland, a continent that was submerged very rapidly by rising sea levels at the end of the last Ice Age, and a landmass that, when intact, was certainly large enough to have supported the emergence of a high civilisation. 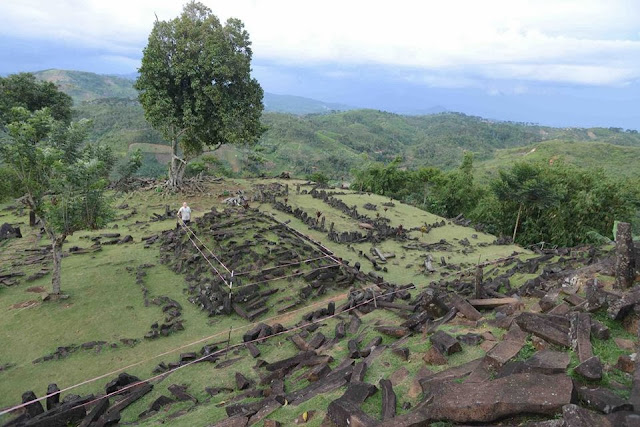 The work at Gunung Padang is only just beginning. The next step is a careful geological excavation to interrogate the initial carbon-dating evidence from the drill cores. As Dr Hilman says: "We have to do much more dating. We know its very important to have very accurate dating." It's important, of course, because on the present evidence Gunung Padang rewrites history, but archaeologists will resist any change to the established paradigm tooth and nail. Indeed there have already been attempts by archaeologists to prevent any further geological work at Gunung Padang on the grounds that it would be intrusive and they "know" that the site cannot possibly be as old as Hilman and his team claim. How they can possibly "know" that is a mystery since there has never been a proper excavation of Gunung Padang and all prior dates given for the site by the mainstream are pure speculation. As Dr Hilman says, before his team got to work there was just "no useful scientific data about the site at all". Even so a ferocious political battle is brewing with established archaeological interests lobbying at the highest political level to get Hilman's work at Gunung Padang stopped. It is in my view a matter of vital importance for the global human heritage that Hilman should be allowed to go ahead without impediment and with all the funding his team needs to get the job done.


For those who wish to visit Gunung Padang the site is a approximately a 3 to 4 hour drive from Bandung depending on traffic conditions (sometimes very heavy and frenetic!). Follow the road to Cianjur from Bandung. At Cianjur take the road towards Sukabumi for 10 kms until you come to Warung Kondang. At Warung Kondang there is a sign on the left side of the road reading "Gunung Padang Megalitik". Follow the left turn and you will find yourself on a very degraded, deeply potholed asphalt road where the going is very slow -- this last 20 kilometres will take you about an hour. The road rises up through tea plantations with beautiful mountain views. When you get to Gunung Padang you will have a fifteen-minute steep climb to the spectacular exposed megalithic terraces. It's an adventure. Enjoy! 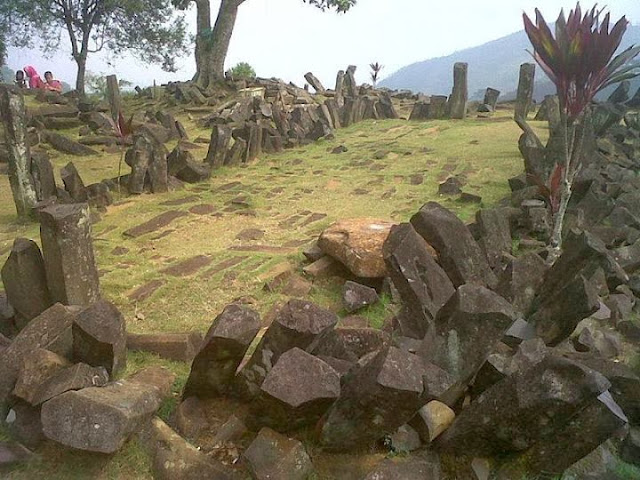